My readers and students know that I’m deeply committed to understanding the mastery process and helping people leverage it to accomplish great things. As part of my own exploration of expertise, I find myself asking acknowledged masters not just what they do for a living, but why they do it, and how they’ve been changed by the process. Their answers are always interesting and inspiring, and often provide impactful lessons for others on a growth trajectory.

So I feel very lucky to be able to interview writer and photographer Tom Clynes. Tom travels the world covering science, the environment and education for publications like National Geographic, Nature, The New York Times and Popular Science, where he’s a contributing editor. His writing and photos have also appeared in The Atlantic, Newsweek, Scientific American, The Sunday Times Magazine (London), and many other publications. He’s the author of two books that should be on everybody’s bookshelves, Wild Planet and The Boy Who Played With Fusion.

As an adventure keynote speaker, Tom brings audiences along to some of the most dramatic and intriguing places on Earth. His keynote presentations combine his authentic personality with extraordinary stories and photos. Listeners are captivated and inspired. Readers of this interview will also be inspired by Tom’s journey from where he once was to where he is today, and how he’s changed along the way. 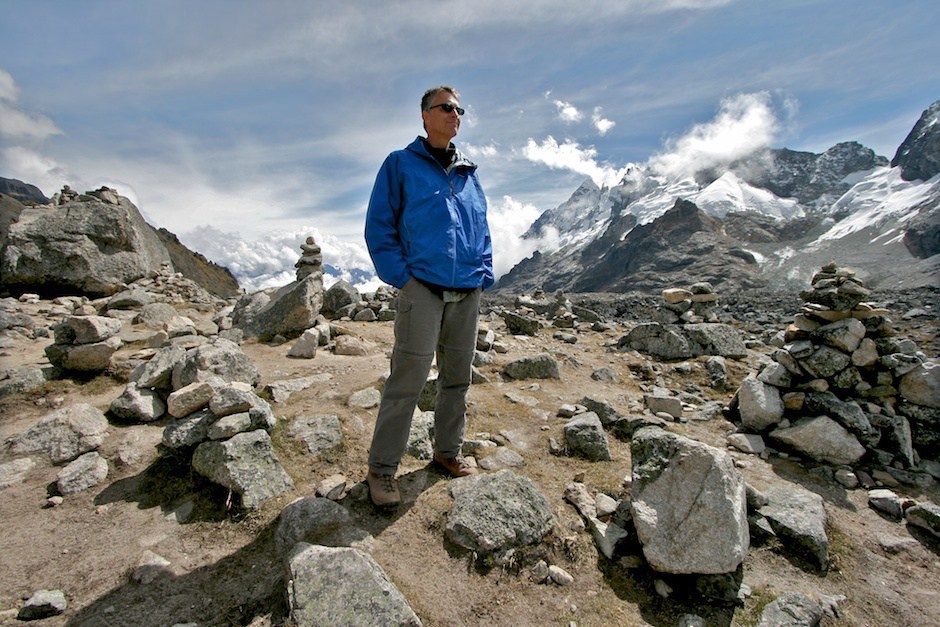 Tom, from my vantage point here in the foothills of obscurity, it’s pretty cool to be able to interview somebody who’s made a career out of exploring exotic places, compiling stories, taking photos, and getting published in high-profile outlets like National Geographic, Nature, Popular Science, and The New York Times. When did it first occur to you that you wanted to write for publications like these? Can you describe your state of mind and your aspirations at that time?

I was one of those super-curious kids who always wanted to know what was going on in the world. That obsessive curiosity was, I think, at least partly a defense mechanism to counter the boredom of growing up in a declining factory town in the Midwest. But mostly, I just wanted to find out for myself what was going on out there.

And I wanted to tell people about it! Chasing the dream of combining travel with writing and photography, l sold my car just after university graduation and bought a one-way ticket to London. I worked in the UK as a microbrewer and a bookstore clerk, then I just kept going—through Europe then Latin America and the south Pacific.

Every so often I’d come back to work and save enough money to hit the road again. I picked up gigs writing advertising copy and speeches for automotive executives. But journalism proved very tough to break into. I spent some very frustrating years banging my head against closed doors, and I considered giving up more than once. But I realized that I wasn’t going to improve the world (or any small part of it) if I kept spending my time helping to sell more Chryslers. So I dropped the business writing and committed full-time to journalism.

And when did you know you could actually make a career out of writing and shooting photos for major magazines, that editors would actually answer your calls and assign you stories that bring you to places like central Africa or the Yukon or Komodo Island?

Well, no one was picking up the phone or sending me anyplace at first! The problem was partly that I didn’t know anyone in the industry—but mostly I just didn’t know what I was doing.

It took five years of mostly speculative work, writing and shooting stories for publications that paid almost nothing, before I started to master the craft and to build my reputation as a writer and photojournalist. Eventually, people began to take notice, and a few high-profile stories led to opportunities with more and more prestigious publications.

It’s not common at all. That probably has less to do with any special talents I might have and more to do with the fact that trying to do both well can be incredibly nerve-wracking. At root they are both forms of storytelling. But a photographer needs to approach reporting in a very different way than a writer would.

In the field, a photojournalist needs to be “on” when the moment calls; if you miss it you may not have another chance. Writers of long-form journalism can often fill in some of the blanks before and after the fieldwork—in fact, it sometimes serves a story to be more laid back, to give relationships with sources time to develop.

Trying to get both words and pictures right—especially when you’re dealing with tight deadlines and challenging people or places—can really pushes the limits of cognitive capacity. And in some situations you literally don’t have enough hands to shoot and take notes at the same time. Teaming up with a top-notch writer or photographer can be a whole lot of fun.

Do you mind sharing how your journalistic endeavors evolved into your role as a National Geographic keynote speaker? I mean, there are a lot of writers and photographers who aren’t particularly good at public speaking. You must have had a moment in which you realized you were good at giving keynote presentations and liked it enough to keep at it. Could you talk about that evolution?

As a form of storytelling, the spoken word is the most immediately gratifying; it’s fantastic to see faces lighting up when you hit a note that really connects. But getting up in front of an audience didn’t come easily at first.

One thing that helped me get beyond my self-consciousness was that I have a pretty deep well of compelling stories and pictures to draw on. When I move the focus away from myself and just tell (and show) the story I can get into a sort of flow state that’s just amazing…and contagious. After my talks people will approach me and tell me that the presentation was a turning point that inspired them to take their lives in bold new directions. I’ve stayed in touch with several who are now doing some really important and impressive work.

I’ve read many of your stories, and you largely manage to keep yourself out of them…you’re a storyteller rather than a character in your own writing and keynote stories. But I have a deep curiosity about your experiences in traveling, taking photos, and writing. How do you balance what’s going on in your own interior landscape against the need to tell a story from a more detached point of view? Can you talk about that?

I don’t think my own story is nearly as interesting as the story of, say, the doctor who’s trying to stop an Ebola outbreak, or the conservationist who’s dodging bullets to save the animals in the Baghdad Zoo. Those sorts of stories are well suited to the style of reporting I’ve developed over the years, in which I set myself up as part participant, part fly on the wall. It’s definitely “immersion journalism,” but I’m most concerned with how and why an experience matters to the reader, not the writer. During Q&A sessions people usually want to know more about my own feelings and reactions, which I’m glad to share. But for the most part, it’s not about me.

You’re able to have experiences and create things that other people consider extraordinary. What’s the experience of expertise like for you? Does it feel ordinary because it’s just part of the life you’ve built, or are you sometimes able to appreciate the incredible progress you’ve made as a journalist, writer, and adventure speaker?

I have a life that’s rich in experience and non monetary rewards. Every major story is like starting a new career from scratch, and there’s tremendous freedom. Sometimes it feels quite ordinary, though, and sometimes I wish it could be more ordinary. There are moments when I’d love to have a job with health insurance and a guy with a ponytail to come down from IT and fix my computer.

Then again, my experience with getting into and out of challenging situations—say, negotiating through a roadblock staffed with skittish teenage soldiers—has given me a lot of confidence that I don’t think I’d be able to get in other ways. The frustrations can be pretty extravagant, but they’re balanced out by those “pinch me” moments when I feel like the luckiest guy on Earth. I had one recently in Guatemala, after I’d helicoptered into the middle of the jungle and was crawling around inside the ruins of a Mayan palace with the archaeologist who’d just discovered it. I don’t mind discomfort and deprivation if it allows me to experience something interesting or beautiful.

I feel incredibly fortunate that I’ve been able to build this kind of career, that I have this freedom, that I get to explore and discover things that matter to me and share them with the world through words and pictures.

May I ask if you work from passion, from discipline, or a mix of the two? Do you have any advice for others aspiring to excel, on either or both of those sources of accomplishment?

It always starts with passion. Then, if an idea is going to become more than just an idea, discipline has to come in. I hear older people advising young people to “Do what you love” and “Chase your dreams.” But they leave out the most important part: If you want to succeed at doing what you love and actually catch those dreams, you’re going to have to be incredibly rigorous and tenacious.

How does offering yourself to groups as a National Geographic photographer and keynote speaker work? What is it about you sharing your stories and photos in keynote presentations that helps these organizations thrive? If an organization brings in an adventure keynote speaker like you to inspire their team, where’s the payoff? How does the inspiration and energy turn into palpable benefits for them?

To me, the terms “motivational speaker” or “inspirational speaker” carry connotations of something cheesy and vacuous. Do my talks inspire? Yes! They also entertain and challenge and open up thinking—but in an authentic way. I use real stories and pictures to bring audiences along “on assignment” with me to exotic and intriguing places. They meet real people—explorers, conservationists, archaeologists, virus hunters, Ebola doctors—who shaped their lives into extraordinary, world-changing adventures. They discover how these heroic people did it, why they did it, and why the world needs all of us to pursue what we really care about.

The programs I’ve developed have proven particularly useful for organizations that want to catalyze creativity and stimulate engagement at the beginning of an important gathering. I work with my clients to customize a program that supports the event’s goals and moves their constituents forward into the rest of the meeting with an anything-is-possible mindset that can generate extraordinary results.

Is what drives you at this point in your career very different than what drove you in the beginning, when you were first falling in love with the possibilities of storytelling?

For me, it’s still fundamentally about curiosity. I’m curious about everything and everyone, and I think I’m stuck with that. No matter how much I read or see on a screen, I don’t think I’ll be truly well-informed if I’m seeing the world mainly through other people’s filters. I believe that it’s intrinsically worthwhile to venture out and discover, for myself, what’s happening out there.

To learn more about the enchanting stories that Tom shares in his keynote presentations, please visit his website.